Carrickmacross, Carraig Mhachaire Rois – a ‘rock on the wooded plain’ – didn’t develop as a town until early in the 17th Century. In 1634 the town of Carrickmacross consisted of Essex Castle, built circa 1630 and occupied by the third Earl of Essex for some time, an inn belonging to William Cesar, (which at the time was the only house with a slated roof, windows and chimney) and about a dozen hovels roofed with straw, no windows, no chimneys. Nearby was Magheross which consisted of more than a dozen similar hovels, in which the Irish lived. 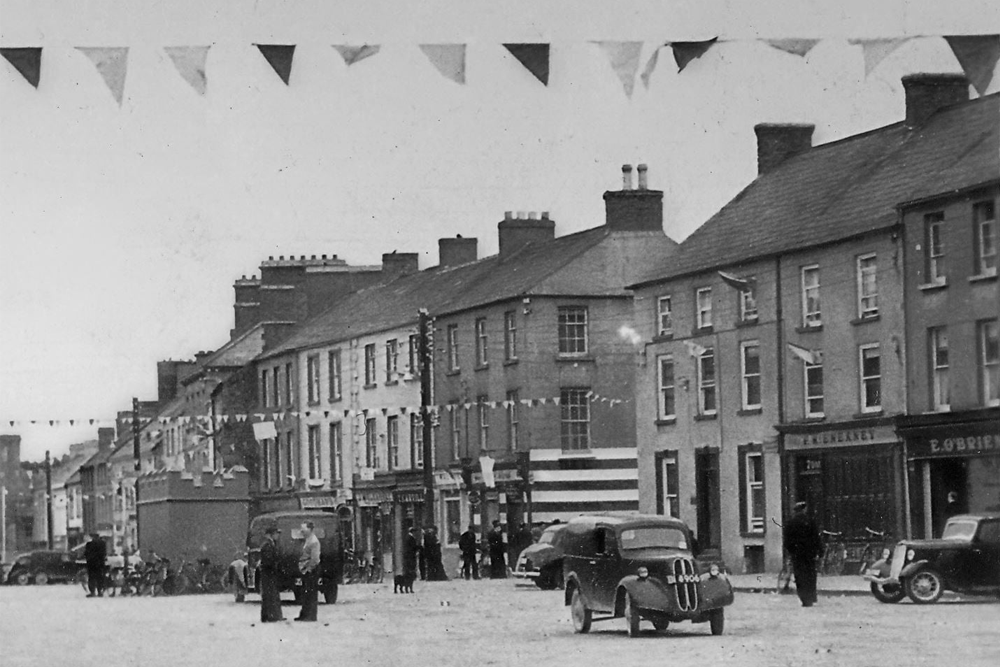 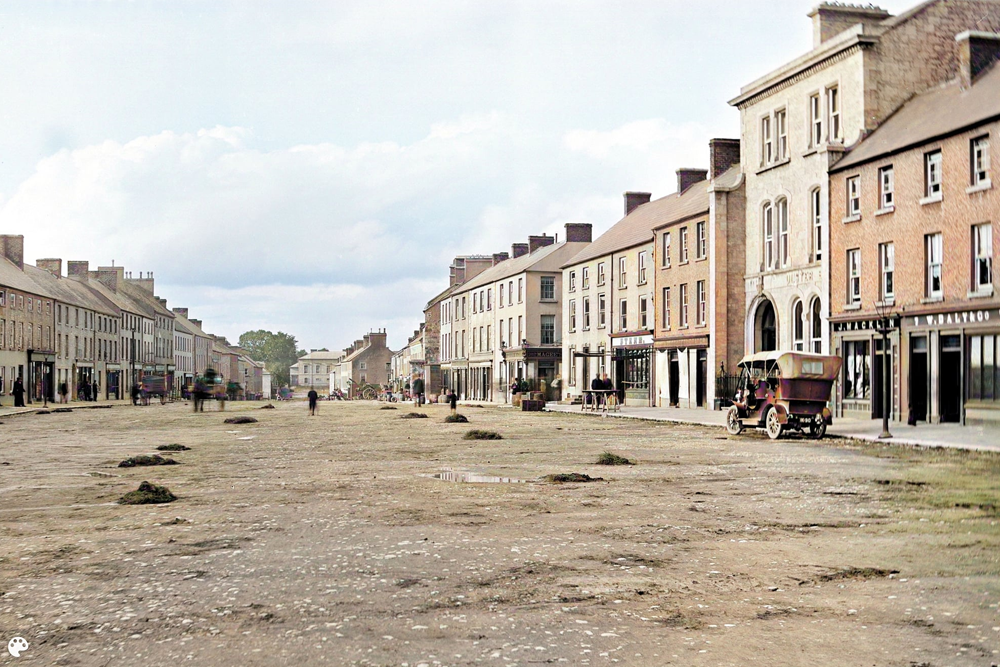 The rebellion of 1641 halted the growth of Carrickmacross and it wasn’t until the 1650’s that the town started to grow again. During this time the Irish moved into the town in great numbers. Carrickmacross was regarded as a large town in the 1660’s, second only to Monaghan town. In 1682 St.Finbarr’s church was rebuilt, the original church having been burned by rebels in 1642. The Williamite wars brought disturbance once again to the town and it was during this time that Essex Castle was destroyed. (The convent of St. Louis now occupies this site)
The 18th Century saw Carrickmacross develop further. The market, held on Thursdays expanded, bringing new prosperity to the town. The town housed the only pig market in the county and had the principal butter market in that part of Ireland. A wide range of goods was on offer at the market including: cattle, sheep, wool, hemp, tallow, timber, bread, apples, horses, brogues, pigs, yarn, leather, beer, hens, butter and eggs. Originally goods were sold at stalls on the streets or on the approach roads to the town, however over the years shops became more commonplace.
Carrickmacross was the first town in Monaghan to build a post-Penal Catholic Church – St. Mary’s Church was completed in 1786. The church remained in use until 1866. (In 1860 it was decided that a bigger church than St. Mary’s was required for the town so on the 2nd July 1861 the foundation stone for St. Joseph’s was laid. The new church was completed in 1867 and soon became one of the glories of the town). In 1789 St. Finbarr’s Church was replaced with a new building at the junction of Farney Street and Bridge Street. A new street, consisting of 54 houses, leading from the Main Street to St. Mary’s Church was completed in 1791 – first called Dawson Street, the street was later renamed New Street and later still and as it is known today O’Neill Street. 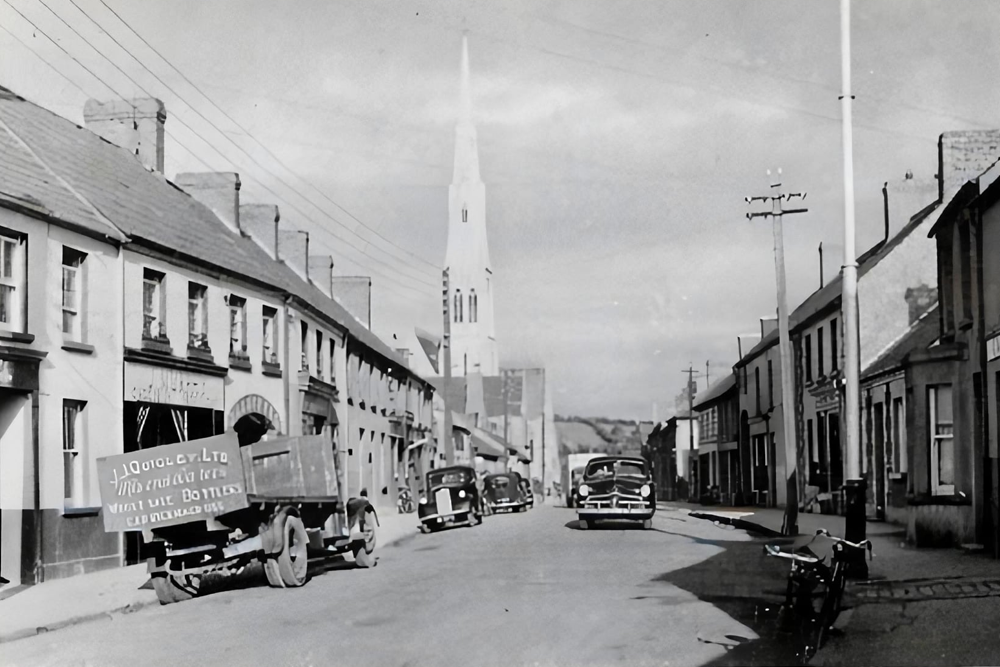 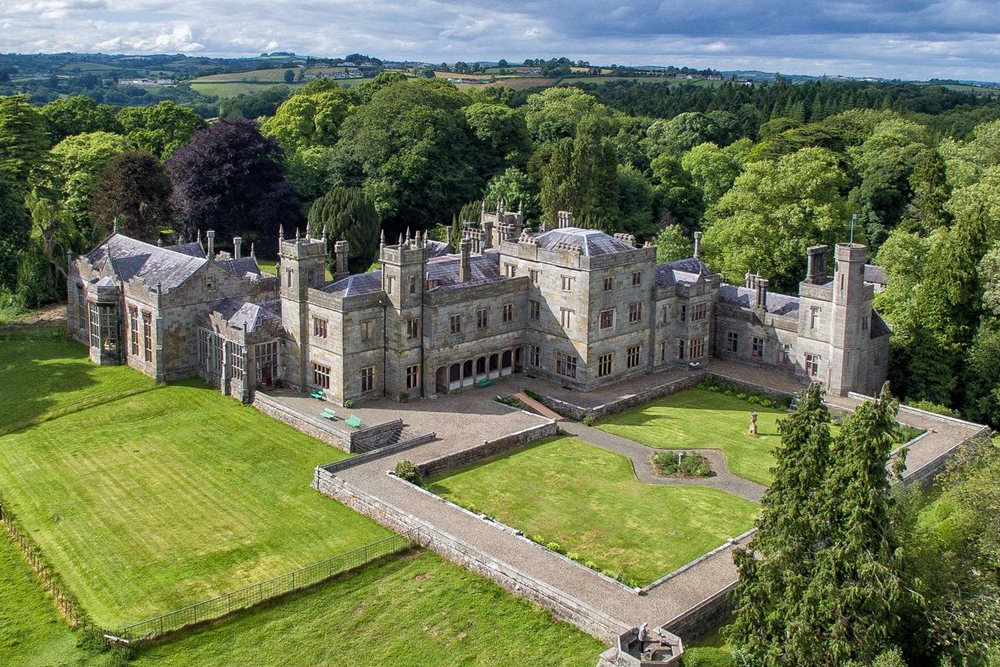 The Shirley estate, with the adjoining Bath estate, were two of the largest in the county. According to The Landowners of Ireland, 1878, the biggest landowner in Co. Monaghan in 1876 was Evelyn Philip Shirley, who owned 26,386 acres, with a valuation of £20,744, all in the barony of Farney. The Shirleys were semi-absentees although E.P. Shirley visited his estates twice a year. The next biggest was the Marquess of Bath Longleat, Wiltshire, with 22,762 acres in Farney, an absentee who seldom if ever visited his estates. The estate’s origin was in the grant in 1575 by Elizabeth I to the common ancestor of the Shirleys and the Baths, Walter Devereux, 1st Earl of Essex, in consequence of his commission from her. For more information on the Shirley Estate please click here >>

Carrickmacross’ success as a marketing and trading centre continued towards the end of the 18th Century and beginning or the 19th Century. The population in the area also increased, however the town received a severe setback with the effects of the Great Famine and post-Famine emigration. In 1861 the population was 2063, by 1891 it had fallen to 1779, population figures began to increase slowly after this and had been stable for more than half-a-century by 1971. The workhouse, built to accommodate 500 paupers was contracted for in September 1840 and the fever hospital was built in 1841.
In the 19th Century the Catholic population of Carrickmacross town formed 87% of the ratepayers in 1861. The Catholic life of the town was further enhanced by the arrival of the Sisters of St. Louis and the Patrician Brothers. The Sisters of St. Louis came to Carrickmacross in 1888 and were responsible for the primary and secondary education of girls. The Sisters are also associated with the revival of Carrickmacross Lace, which was originally brought to the area from Italy by Mrs. Gray Porter in 1820. The Patrician Brothers arrived in 1902 and began teaching in the national school and shortly afterwards began a secondary school, their secondary school, the High School was opened in 1971.
Carrickmacross got its urban council in 1899. The first chairman was J.J. McCaul and the town clerk was Thomas Nolan. The urban council changed some of the town’s street names and so Evelyn Street became Parnell Street; Dawson Street which already had been changed to New Street became O’Neill Street; Bath Street (Back Lane) became Farney Street; Church Hill became Castle Street: Bridge Street, St. Finbarr’s Terrace; Magheross Road became Magheraboy Road and Penny Street became Mullinary Street. However these changes did not become official until after a referendum was held in 1956.
The Catholic Hall was built in 1906 and Dean Finnegan erected the Holy Family Fall in the 1950s. The town’s first cinema opened in 1935. It was during the 1930’s that the establishment of new industries commenced. In 1934 an Industrial Development
Association was established – fundraising and the securing of a site and a contract with J.J. Stafford and Sons, Belfast saw the beginnings of Stedfast Shoes. A second factory, an alcohol factory, began in January 1936. Housing was also on the councils agenda – in 1912 25 houses were built on Cuchullain Terrance, then between 1932 and 1933 24 council houses were built in Pearse Ave and 35 council houses were built in Emmet Road and Emmet Street. A further 8 houses were built on Mullinarry Street in 1935.
The 1960s saw an unprecedented period of growth for Carrickmacross. The industrial base expanded bringing more jobs to the area. Shops benefited from this, with many of them extending their premises. Public houses now provided new comfortable lounges for patrons and the town began to attract tourists. Hotel Nuremore attracted large crowds and the new GAA pitch, Emmet Park, was developed on the Ballybay Rd. In 1956 P.B. Gunne opened a cattle mart at the old Market House and Jack Lynch T.D. opened the technical school in March 1959. In 1970 a new Glór na nGael museum was opened.
Following the Second World War, the town was faced with the problem of housing shortages. The urban council sought suitable sites for housing schemes to alleviate the problem. 12 houses were built in Woodlands in 1950 and 56 houses were constructed at The Horse Hill. This scheme cost £92,000 and was completed on 31st August 1952 at which time they were handed over to the Council and were known as St Macartan’s Villas. However the major housing scheme in the area was the construction of 124 houses by the Council at Cloughvalley. In addition to these Council developments, many private houses were built in the urban area and immediately outside it.
Stedfast footwear remained the towns pride and joy in terms of industry – in 1969 a subsidiary factory of Stedfast, Fane Shoes Ltd began producing plastic shoes and by 1971 300 people were employed by Stedfast. However in November 1974 Stedfast announced that the workforce was to be reduced by 40% – a month later Fane Shoes Ltd closed down, by May 1975 Stedfast itself closed, leaving 200 unemployed. In 1977 the Weyenberg Shoe Corporation took over the factory and in September 1978 Stedfast reopened its doors employing 135, with the hope that the work-force would increase to 250.
Other industries came to Carrickmacross at this time. In 1952 Irish Stoneware and Fireclay Ltd began producing bricks, sanitary and ornamental glassware, roofing tiles and drainpipes. The Alcohol Factory closed down and the Sure Wayte industrial complex was established in its place. In 1950 the old workhouse was leased to the Fanevalley Fruit Preserves from the Dept. of Health.
In 1962 the old fever hospital was also leased and the industry became known as Fane Valley Cooperative Ltd In 1971 the factory was taken over by Lough Egish and production was transferred to Lough Egish. In 1969 the Uster Robert enterprise, Aclint Bridge began making towels, Gernord, a French company trading under the name Gerflex began producing vinyl tile for floors and walls in 1968 and in July 1978 Bose Ireland began making stereo equipment.